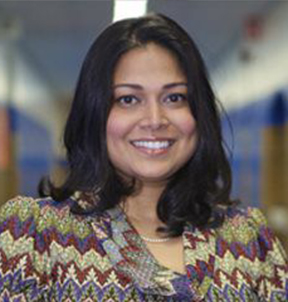 Rita Raichoudhuri is the former principal of Wells Community Academy High School and current Executive Director of Early College in Chicago Public Schools. As an educational leader, she strives to provide students with a well-rounded education with attention to rigorous academics, social emotional learning and robust opportunities for post-secondary success. She effectively engages all stakeholders in accomplishing this task. During her tenure as principal, Wells High School saw tremendous growth in all fronts. Now, Rita serves students at the district level.

Rita began her career in education as a classroom teacher in a high needs neighborhood middle school in Northern California. Her hands on approach to pedagogy and high expectations of her students led them to achieve some of the highest gains in the district, garnering her several awards and recognitions. During her years as a teacher she was also actively engaged in various leadership opportunities within her school. She subsequently moved to the district office to lead special initiatives around building the leadership capacity of teachers. She moved to Chicago ten years ago to join the newly formed Office of Performance. Her primarily role was to help principals systematically build the capacity of their teacher leaders in order to improve student outcomes. Rita also led several key district initiatives around adult learning during her time in the Office of Professional Learning.

Rita believes that education is the primary equalizer of various social justice issues that our communities face today. She is passionate about providing our next generation with quality education and life options so that they may break the cycle of poverty for their families and communities while learning to be contributing members of society. Although not a Chicago native, she has fallen in love with this city and considers it her home. She wants to see all the students of Chicago Public Schools be successful.