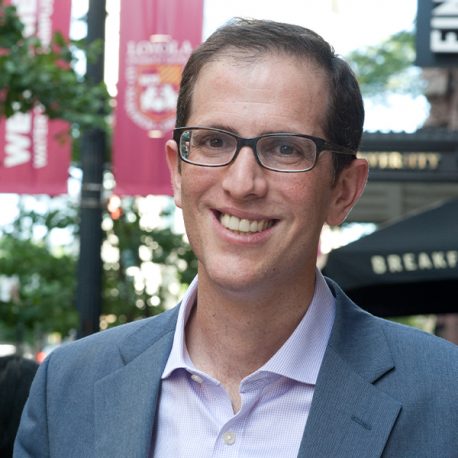 Seth Green is the founding director of the Baumhart Center, an interdisciplinary center at Loyola University Chicago that equips Chicagoland leaders and students with the business tools to accelerate social impact. The Center is home to a highly selective MBA program, called Baumhart Scholars, that prepares working professionals to marry profit and purpose in their careers. Seth is also an executive lecturer in the Management Department of Loyola’s Quinlan School of Business, where he teaches courses on nonprofit leadership, social entrepreneurship, and corporate social responsibility.

Seth joined Loyola after leading three social ventures at the forefront of fighting poverty and expanding opportunity. Most recently, he served as executive director of Youth & Opportunity United (Y.O.U.), a Chicagoland nonprofit that prepares low-income youth for post-secondary and life success. During his tenure, he spearheaded an expansion of Y.O.U.’s programs from serving 450 youth in 2010 to 1,600 in 2017. He also envisioned and led a $16.4 million fundraising campaign to build a new Y.O.U. youth center and financial endowment.

Seth began his career as a consultant at McKinsey and Company, where he worked with private sector clients on strategic planning and change management. A recipient of McKinsey’s Community Fellowship, he spent one year of his time at the firm supporting nonprofit clients, including the Gates Foundation and United Way.

Seth is a sought after speaker on social entrepreneurship, corporate social responsibility, nonprofit leadership, and cross-sector partnership. He served for numerous years as a discussion facilitator for the Clinton Global Initiative and he was a plenary speaker at the White House-sponsored conference on Connecting Communities for the Common Good. Before joining Loyola, Seth was also a lecturer at Northwestern University, where he taught courses on nonprofit management and social impact leadership.

Seth is a frequent media contributor, having served as a guest on C-SPAN’s Washington Journal, CNN, and MSNBC, and having written op-eds for the Christian Science Monitor, Crain’s and Fortune Magazine. In addition, his work has been featured by hundreds of publications, including the New York Times, the Washington Post, and the Chronicle of Higher Education. For his social innovation leadership, Utne Reader named Seth one of 50 “Visionaries Who Are Changing Your World.”

Seth has a bachelor’s degree from Princeton University, master’s degrees from the London School of Economics and Oxford University on a Marshall Scholarship, and a law degree from Yale University. He currently serves on the Social Impact Advisory Panel at the Chicago Community Trust, on the Impact Investing Advisory Council of the YWCA Metropolitan Chicago, on the Council of Advisors of Loyola Limited, on the Advisory Board of Concordia Place, and as a member of the Economic Club of Chicago. Seth is also a co-chair on the United Way of Metro Chicago’s Campaign Cabinet.